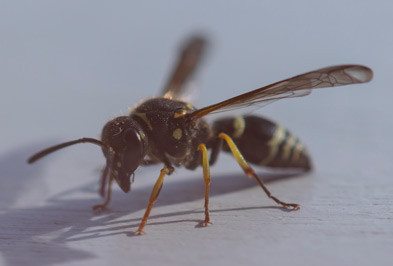 Color: Varies by species, but generally dark brown to black with some yellow or light colored markings.

Characteristics: Most stinging insects are social insects, living in large colonies. Mud daubers are an exception as they are a solitary insect.

Size: Varies by species, but generally most stinging insects range in size from 3/4 of an inch to 1 inch in length.

There are many stinging insects that can affect property owners in Houston.  Some of the common ones that Holder’s Pest Solutions controls are:

Why do I have this problem?

Stinging insects are most likely on your property looking for a food source or nesting area.  The queen will emerge after the winter months and look for areas to nest in; depending on the species they will eat pollen, nectar and other insects.  The queen will also look for an area with a water source such as a pond, bird bath or pools.

What kind of threat do stinging insects pose?

Many of the stinging insects species are known as nuisance insects because the normally do not do significant damage to your home or property; the exception to this is the damaging carpenter bee.  However several of the species are aggressive and have powerful stings.  These stings can cause strong allergic reactions that can lead to death in some.  If you notice that you have a stinging insect colony around your home it is best to call in a professional exterminator to handle them.

How do I control stinging insects?

Eliminating stinging insects from your property can be a difficult task.  There is the possibility of being stung and if you do not destroy the entire colony the remaining insects will most likely come back and rebuild their nest.  Contacting the professionals at Holder’s Pest Solutions is the safest and quickest way to handle stinging insects.  Contact us today to find out more about stinging insects and how we can help rid them from your home or business.

The Life Cycle of Weather and Pests

As time passes following Hurricane Harvey, Holder’s phone continues to ring with new pest questions daily. Houston’s weather is still readjusting from the extreme moisture, which means pests are too. We are here to explain [...]

As you may already know, May is national barbecue month. Although the month is coming to a close, barbecue season continues year-round in Houston – so there’s plenty of time to load up the grill [...]

With warmer, wetter spring weather on its way, we can expect to see a higher than normal flying pest population this year. Houston’s winter weather brought warmer than normal temperatures – who remembers the 80-degree [...]