Few things compare to the unsettling feeling of seeing a spider scurrying around in your home. While our imaginations may let us get carried away with the potential dangers of spider bites, most common spiders known to Houston are fairly harmless.

That doesn’t mean that they won’t give you nightmares, though. If you have spiders, it probably means there are other, smaller insects that are present for spiders to feed on. When confronted with a spider infestation, be sure to give Holder’s a call!

In the meantime, we’ve detailed a few spiders you may see in the Houston area and some key facts to *hopefully* help settle your fears. 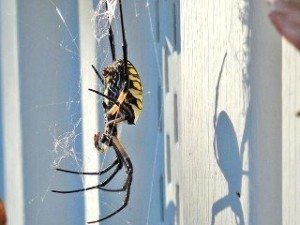 Asposematism, or warning coloration, is an evolutionary trait that plants and animals gained over time to signal a particularly dangerous characteristic they may have: a poison dart frog’s red skin, a skunk’s black and white pattern, a coral snake’s vibrant pattern. Humans have come to view insects with color as dangerous, so when we see a garden spider’s yellow coloration on the abdomen, we might assume it’s venomous. This is hardly the case, however, as the garden spider is an entirely non-venomous creature and are beneficial in controlling other insect populations. These spiders rarely make their way indoors, and typically remain in your yard or garden. 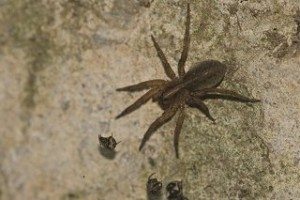 Contrary to popular belief, not all spiders produce webs. Most people assume that arachnids produce a web hoping to catch flies and gnats, but the wolf spider does no such thing. Instead, they protect themselves from predators by burrowing deep into the ground and using a silk filament to shield the entrance.

Unlike most other spiders, the wolf spider protects themselves from predators by burrowing deep into the ground and using a silk filament to shield the entrance. They like grassy areas where they can easily burrow but will venture inside during the colder months. You might see them in or around door frames, windows and basements. The wolf spider is no harm to you and will only bite if provoked. 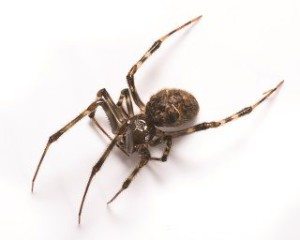 Many spiders have the nickname of the “house spider,” because it’s an all-encompassing term used to characterize those spiders entering a home. The particular species we’re discussing now is the Parasteatoda tepidariorum, or the common house spider. These are the pesky arachnids spinning cobwebs in your attic or along the bannister on your outdoor deck. While certainly not a threat to your health, the cobwebs they produce and their presence alone can sometimes be a nuisance. Exclusion is the best prevention method, which includes filling entry-points in your attic or basement with caulk and vacuuming the webs to remove the actual spider along with its eggs. 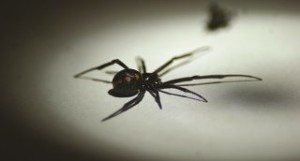 The black widow’s moniker derives from the misconception that females devour their male counterparts shortly after mating. While untrue, this certainly doesn’t help the black widow’s mystique as a cold-blooded killer. Black widows possess the classic “red hourglass” indicator on their abdomen, signaling to other creatures their venomous nature.

Yes, the black widow contains venom that can affect your central nervous system, which demands immediate medical attention. However, black widows mainly keep to themselves and will only bite should a person disrupt their habitat or appear to threaten the spider’s eggs. Black widows mainly take shelter in dark, secluded areas. Always be careful when shifting logs in your outdoor woodpile or when shifting items in your basement. If you do believe to have found a black widow spider, consult a pest professional for help with removal. 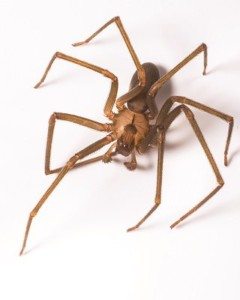 The classic identifier of the Brown Recluse is the “violin” shape on its cephalothorax, or the area where the legs are attached. Its curvature very much resembles the classical instrument, yet brown recluses are often the most misidentified spider species. Indeed, most studies find them to be “widely over reported,” which probably stems from a nationwide fear of any brown spider entering the home. Much like the black widow, the brown recluse prefers secluded hiding locations, and their bite contains venom harmful to humans. Their bite is painless, with most victims not even realizing it happening. Again, seek out a medical professional if you happen to encounter a brown recluse.

How Do I Get Rid of Spiders in My Houston Home?

While most spiders aren’t able to harm you, it doesn’t mean they’re welcome in your home. Their presence indicates that other insects are likely invading your home. The best way to keep your Houston home or business protected is to call a professional who will uncover why spiders are in your home in the first place and treat the source rather than the symptom.

If you’re sharing your living quarters with spiders, contact Holder’s Pest Solutions for managing these pests.