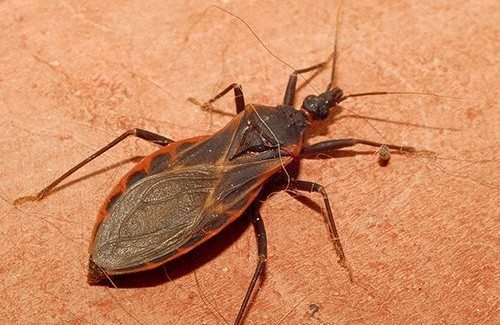 Although their name suggests otherwise, kissing bugs are far from affectionate pests. As many know, they are carriers of Chagas disease – a parasitic infection with very few symptoms. Many don’t even know if they have it, however, the CDC estimates that approximately 300,000 people in the U.S. are affected. The acute phase (first few weeks to months) of the disease is usually symptom-free, where the chronic phase can cause the development of cardiac and intestinal complications.

Kissing bugs, also known as triatomine bugs or assassin bugs, contract the disease when they bite an infected animal or person and transmit it through fecal matter that can enter the bloodstream after biting their next victim. They typically bite people’s faces (hence the name ‘kissing bugs’) when they are asleep at night and remain hidden during the day. Many people who are bitten are not aware, as there is usually little to no reaction to the saliva of the bug.

Where do kissing bugs live?

In terms of climate, kissing bugs seem to prefer warmer regions and have been identified in at least 26 southern states, as well as Central and South America.  The highest density of kissing bugs in the U.S. can be found in Texas, New Mexico and Arizona. This means Houston residents should be on the lookout and report any sightings.

Where do kissing bugs hide in homes?

It can be incredibly difficult to know if you have kissing bugs, as they are often hiding in crevices in the walls and roofs. However, a few hiding places you can check are chicken coops, dog kennels, rodent or animal nests, under brush/rock piles, and under porches. They also may occasionally be seen flying towards the light at night.

Can kissing bugs harm my pets?

Yes, kissing bugs are known to bite animals as well as humans. Dogs are most commonly affected and can suffer severe heart disease if they transmit Chagas. Fortunately, most infected dogs and cats are asymptomatic.

How do I prevent kissing bugs?

The most important step in preventing kissing bugs, just like many other home invaders, is checking to see that any unwanted entrances in the home, cracks and small openings, are sealed and to repair any damaged screens, crawlspace and attic vents. Keep piled objects such as wood, stone or concrete away from your home and avoid using outdoor lights.

Because it’s so difficult to know if you have kissing bugs on your property, it’s best that you consult a professional who can take a look around and assist you in taking precautionary measures.

If you are concerned about kissing bugs or any other pests, contact Holder’s for your residential and commercial pest management needs.